Speak of Rotary aircraft and the majority of people will conjure up sleek images of Helicopters, such as the Bell 222 made famous in the TV show ‘Airwolf’. An aircraft which can take off and land vertically, fly forwards, backward and sideways and effortlessly stay static in the sky through a process called a hover.

A Helicopter though is only one type of Rotary powered aircraft, there is another type. not as well known, which is called a Gyrocopter and those who know about them often think of rickety old machines from days gone by.

Gyrocopters (also known as Autogiro, Autogyro but more commonly, a Gyroplane) are the forgotten brother, overshadowed by its complex, expensive sibling, the Helicopter. To understand why the Helicopter was the dominant Rotary aircraft and why now the Gyroplane is making a revival, it is necessary to understand a little of Rotary history.

A Gyroplane is an aircraft which uses a free rotating unpowered wing. It gains lift by a process called autorotation, where once the wing is spinning at a critical speed, forcing further air through the rotary wing allows it to maintain rotation ‘automatically’ and also to generate lift. So long as a spinning rotary wing in autorotation has air forced through it, ie. falling through the air (gravity pulling it down) or being pushed forward through the air from an engine driven propeller (or jet engine), it continues to spin through autorotation and generates lift. Forward flight can be accomplished by the engine driven propeller creating forward thrust or using some of the pull from gravity as the aircraft descends, albeit level or climbing flight can only be accomplished with an engine. A Gyroplane thus cannot stall, so long as it is being pushed forward (by its engine) or falling to the ground (gravity pulling it down), the rotary wing will generate lift. Without an engine running, the rotary wing will generate sufficient lift to maintain flight, albeit it will slowly be descending towards the ground.

A Gyroplane requires a very small landing area, even without an engine, it can land safely, almost anywhere. It’s landing profile is not vertical but is much steeper and shorter than a fixed wing aircraft. For take off, they require a very short take off roll which is primarily needed to speed the rotary wing into autorotation before it generates sufficient lift to climb out from the ground. It’s take off profile is also not vertical but more like a fixed wing aircraft, depending upon the power of the engine giving the forward thrust. Examples of Gyroplane’s do exist which can take off and land vertically, but they borrow from Helicopter technology using the engine to rotate the rotary wing during take off and landings. The ability though of a Gyroplane to land almost anywhere, especially when an engine failure occurs, provides it with a major safety benefit over Helicopters. Should an engine fail in a Helicopter, if the engine is not disconnected from the rotary wing and the angle of attack changed within a few seconds, the Helicopter will crash, often fatally. Even if the engine is disconnected and the angle of attack changed, due to the limitations of speed the gearbox will tolerate, landing an autorotating Helicopter is fraught with difficulties and also limits the areas where it can land.

A Helicopter can generally, if the engine provides sufficient power or the pilot is able to use the aircraft momentum to generate the initial power requirements, enter a state of flight called a hover. This is where the Helicopter is stationary in the sky and over the ground with zero airspeed and zero groundspeed.

A Gyroplane can, under certain conditions, also hover over the ground and fly backwards or laterally. As the rotary wing of a Gyroplane is unpowered, the only way this can be achieved without the Gyroplane descending is if sufficient oncoming wind exists, ie. if a particular Gyroplane requires 30mph of oncoming wind for a given load for the rotary wing to generate sufficient lift to compensate for its weight, then you would require a 30mph oncoming wind with an engine providing 30mph compensating thrust against the wind to remain stationary and hover. In such conditions, if the engine can provide more power, it can be possible to climb and descend vertically whilst in the air. The same exists for backward or lateral flight, if an oncoming wind is 30mph, then an engine producing less than 30mph forward thrust would allow the Gyroplane to fly backwards or laterally given correct control inputs.

Thrust is produced by an engine-driven propeller, typically in a modern Gyroplane this is at the rear but some models have a front facing propeller, such as the GyroJet.

The powered rotor produces both lift and thrust, and is tilted forward

Gyroplane’s (or Autogiro as they were then called) were invented in 1920 by Juan de la Cierva, born into a wealthy family on September 21 1895 in Murcia, Spain. As a teenager he had a passion for aircraft and started his aviation exploits through experimentation with gliders as early as 1912. He went on to study at the Escuela Especial de Ingenieros de Caminos, Canales y Puertos in Madrid to become a Civil Engineer. After graduating he went into aircraft design, initially designing a bi-wing bomber which was tested in May 1919. Unfortunately during tests the aircraft stalled and crashed. Another aircraft of Juan’s design, a tri-motor aircraft suffered the same fate which led Juan to look into aircraft design where a stall could be overcome.

After serious investigation, in 1920, Juan came up with his idea for an unpowered rotational wing, setting the foundations for his idea of an autogiro, which he then patented. Over the next 5 years, Juan went on to perfect his design with a series of prototypes Cierva C1 – C6, of which in 1923, the Cierva C-4, a single seat, single engine four blade rotor became the world’s first practical autogiro which flew 200 yards on January 9, 1923 in Madrid, Spain by Lieutenant Gomez Spencer.

In 1925, Juan moved to England, where with the support of a Scottish industrialist James G. Weir, he founded the Cierva Autogiro Company. During the same year he demonstrated his Cierva C-6 to the Air Ministry in Farnborough. 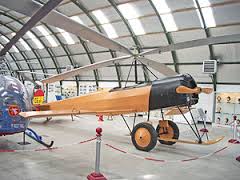 On September 18, 1928, he flew a Cierva-C8 across the English Channel, and in 1930, he flew one from England to Spain. Autogiros were used during the 1930s for military liaison, mail delivery, and agricultural purposes.

During the 1930’s, Juan and his Cierva Autogiro Company gained acceptance within the aviation community and further advances in the basic design, pitch control and ability to ‘jump’ takeoff looked certain to see the Autogiro as a force within aviation. Cierva also had established an understanding of rotor dynamics and control, which was applicable to all rotorcraft, and undoubtedly led to the realisation of the helicopter.

On the morning of 9 December 1936, Juan boarded an Amsterdam bound KLM DC-2 at Croydon Airfield. During the take-off roll, the aircraft stalled and crashed into a building at the end of the runway, bursting into flames, killing all passengers. Ironically, the very reason why Juan entered into Rotary aviation, to prevent aircraft stalls, ultimately ended up taking his life.

Dawn of the Helicopter 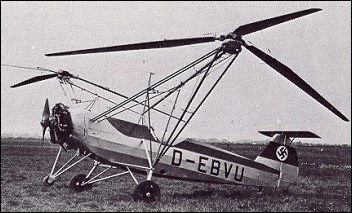 The earliest recorded helicopter concept, ie. a powered rotor to generate lift, came from China around 400BC and was used as a childrens toy. The toy was introduced into Europe and it wasnt until the 1480’s that the most famous helicopter type device, the “aerial screw” was engineered by Leonardo da Vinci. In the late 1880’s, Thomas Edison developed an internal combustion engine powered device which was able to fly for 1.5km at a height of 4 meters with no pilot. This was followed in 1906 by the French brothers, Jacques and Louis Breguet, who succeeded in a manned flight 0.6 meters for a minute.

Although many scientists and engineers were working on various guises of a Helicopter, the importance of Juan De La Cierva’s work on rotors and the effect upon the evolution of the helicopter cannot be overstated, and is indeed recognised throughout the industry. In the process of creating the Gyroplane (Autogiro), Cierva established an understanding of rotor dynamics and control, which was applicable to all rotorcraft, and undoubtedly led to the realisation of the helicopter.

Professor Henrich Focke, who was licensed by the Cierva Autogiro Company and worked with the C-19 and C-30 Autogio’s, went on, by 1936, to design and build the first operational Helicopter, the Focke-Wulf Fw 61. It was the advent of the Focke-Wulf Fw61 which seemed to have confined the Gyroplane to history.

Although the Gyroplane was used in World War 2, for example the Focke-Achgelis Fa 330 which was towed behind German U-Boats to allow the lookouts to see further ahead, it wasnt until after World War 2 that a Russian engineer, Igor Benson, who immigrated to the USA, picked up the Gyroplane gauntlet and advanced its cause. 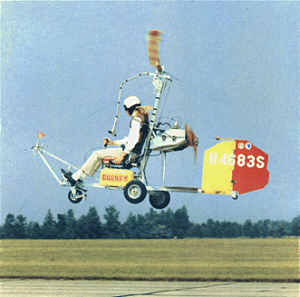 Igor B. Bensen was born in 1917 in Rostov, Russia. he immigrated to the USA, studying in Hoboken at Stevens Institute in New Jersey where in 1940 he received a mechanical engineering degree from Stevens Institute. He commenced his career with General Electric who in 1944, put him in charge of helicopter research and development. In 1953, Igor founded the Bensen Aircraft Corporation in Raleigh, North Carolina.

In 1954, Bensen was selling plans for the B-6 Gyroglider. It was designed using a 3/8 water pipe and plywood. Things that the individual had easy access to at their local hardware store. The next model that Bensen introduced was the B-7 Gyroglider and was constructed out of Reynolds “Do-it-yourself” aluminum. The B-7m was Bensen’s first powered Gyroplane and used a Nelson H-59 engine. The round tube frame was a little difficult for homebuilders to plug and drill accurately, so Igor designed the B-8 frames in 2 x 2 tubing. The B-8m used the McCulloch engine that was designed for military target drones. The Bensen Gyroplane over the years became the most purchased homebuilt aircraft plans. The Bensen Aircraft Corporation was the first gyroplane manufacturer to offer their aircraft in kit form and among one of the first to do so in all forms of Sport Aviation.

In the 1950’s, a British company, Fairey Aviation took up the Gyroplane gauntlet and designed the Fairey Rotodyne, a compound gyroplane designed intended for commercial and military applications. A development of the earlier Gyrodyne which had established a world helicopter speed record, the Rotodyne featured a tip-jet-powered rotor that burned a mixture of fuel and compressed air bled from two wing-mounted Napier Eland turboprops. The rotor was driven for vertical takeoffs, landings and hovering, as well as low-speed translational flight, and autorotated during cruise flight with all engine power applied to two propellers. Although the concept was sound and trials were successful, the Rotodyne program was eventually cancelled when a combination of politics and lack of commercial orders arising from concerns over high levels of rotor tip-jet noise doomed the project.

Gyroplane’s continued to remain in the domain of enthusiasts. Helicopters had stolen their thunder!

In the last 25 years though, companies such as Magni srl, Layzell, Merlin, AutoGyro and ELA started the beginnings of the Sport Aviation Gyroplane revival. Magni with it’s dual seat VPM or Layzell/Merlin and their single seaters played a large part in this comeback but the introduction by RotorSport of a CAA certified permit Gyroplane, the MT-03, turned a distant rumble into an oncoming storm.

Larger companies, notably Carter Aviation and Groen Brothers, both from the USA, have taken and enhanced Gyroplane concepts and technology as seen on the Fairey Rotodyne to create a new level of aircraft, competing almost head to head with the Helicopter.

In the UK, Gyroplane’s are seen as the only growing sector of Sport and General Aviation, a situation mirrored in many countries.

Dont take our word for it, visit the Gyroplane Museum at Rufforth Airfield in York or try a Gyroplane today and discover a form of flying second to none.